Title: An Interview with Katharine Donato and Catalina Amuedo-Dorantes, Editors of RSF Journal Issue on the Legal Landscape of Immigration 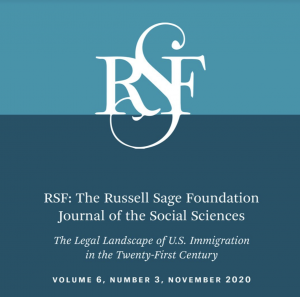 Demographer Katharine Donato (Georgetown University) and economist Catalina Amuedo-Dorantes (University of California-Merced) edited the latest issue of RSF which traces the history and contemporary landscape of legal immigration to the United States. In this interview with RSF, Donato and Amuedo-Dorantes share their insights on some of the issue’s key findings.

One of the arguments in your introduction to The Legal Landscape of U.S. Immigration journal issue is that American immigration policy is distinguished by overreliance on presidential executive orders. Can you discuss how this peculiar feature of our immigration system developed? Do you have any thoughts on the relationship between the transfer of power between the Trump and Biden administrations and changes to immigration policy?

Our argument is that recent U.S. immigration policy and practice have increasingly relied on executive orders and actions rather than Congressional legislation. This is true especially in the last 30 years when Congress has been unable to pass legislative reforms to the legal visa system.

U.S. presidents have a long history of using executive actions. Take, for example:

But more recently, especially in the last three decades, executive actions have targeted many more (millions) immigrants and have changed different components of the legal visa system. Obama’s Deferred Action for Childhood Arrivals (DACA) was created through an executive order. More recent actions and orders affect how asylum applications are processed and how immigration judges use discretion. They have suspended the entry of immigrants from certain countries, reduced the number of refugees for resettlement, and shifted visa requirements for high- and low-skilled temporary workers. The list of these types of executive actions/orders/rule changes exceeds our ability to summarize them here. Our point is that, now, there is more breadth and depth in the “reach” of presidential executive actions, affecting more immigrants in many more ways than in the past.

Given the increased politicization of immigration, much of Biden’s future immigration initiatives will occur in the form of presidential executive actions, as was also the case under Trump. Executive orders related to DACA and TPS recipients will probably be amongst the first, reinstating the programs, which will still grant temporary status since courts have upheld that federal power to regulate immigration and naturalization lies with Congress. The Biden administration will also aim to change the “public charge” rule. Implemented by Trump, it gives officials the discretion to turn away immigrants who apply for a visa or for permanent residency after having a temporary visa, if they think they will rely on public benefits in the future.

We also expect executive orders shifting guidelines for those who seek asylum at the border, possibly removing credible fear interviewing away from the responsibility of Customs and Border Protection and returning it to asylum professionals from USCIS. In addition, executive orders on enforcement will likely shift ICE deportation to focus on those who have committed serious offenses. The appointment of Attorney General Garland will help to depoliticize the immigration court system, which will mean more discretion for immigration judges.

The Biden administration has also promised to increase the number of refugees to be resettled in the United States by setting the annual refugee admissions cap at 125,000. In contrast, each year of the Trump administration witnessed a lower cap than the year before; this year the cap is set at 15,000 – the lowest level since 1980. Raising the ceiling will necessitate reworking the refugee resettlement infrastructure to build capacity in government and non-profit organizations. It will take time to do this, and it may affect how quickly 125,000 refugees can actually be resettled. But even if slow at first, we believe that Biden will raise the cap and resettle more refugees next year than in any year of the Trump administration.

What are your thoughts regarding the recent U.S. Supreme Court decision in summer 2020 to uphold Deferred Action for Childhood Arrivals following the Trump administration’s efforts to do away with this program?

What the Supreme Court decided in 2020 about DACA is NOT to uphold the program. Instead, in June 2020, the Supreme Court ruled against the U.S. government’s attempt to end DACA because it was terminated in an arbitrary and capricious manner. Thus, the Court did not uphold DACA; rather, it indicated that the way in which the Trump Administration tried to end it was illegal. As a result, within several weeks, the Trump Administration announced new rules for DACA, including that it would no longer accept first-time DACA applications, and that renewal applications must be made every year rather than every two years. However, in December 2020, the courts ordered the termination of the new rules that limited DACA. Therefore, at the moment, the government is accepting new DACA applications and renewals occur every two years.

So, if DACA is back the way it was, what would a new Biden executive order re: DACA look like? Well, Biden talks about DACA recipients as dreamers – a broader group of persons who entered as children with their migrant parents but entered earlier or later than the dates specified for DACA eligibility. Biden wants to protect dreamers, so his executive order may reinforce DACA by maintaining its original design under Obama, plus expand its coverage to also cover others currently not eligible. However, because only Congress has the federal power to regulate immigration and naturalization, what can be achieved via executive action alone is limited. Given that the Democrats now control the Senate and House of Representatives, Biden will likely push for legislative actions on immigration. If he does this, we suspect the highest priority is a path to permanent residency and citizenship for DACA and TPS recipients.

Several of the journal issue’s contributors address pathways to citizenship for groups with special status, including military veterans, refugees, asylum seekers, and unaccompanied minors. Are there any particular issues relating to these groups of which readers should be aware, for example American voters’ thoughts on whether undocumented immigrants should be allowed to gain citizenship through military service or the issue of unaccompanied minors that has risen to prominence in recent years?

This is a very big question. A citizenship bill for dreamers, DACAs, and TPSers is very possible, as we said above. Given that we are convinced that at least some relief for these groups will occur either in executive or legislative actions, then it is also possible for other groups to be included. There is strong public support for military veterans to access a path to citizenship. Refugees, once resettled in the US, already receive permanent residency, which places them on the path toward citizenship, so they are not relevant here.

As we said above, asylum seekers will see the process open back up through executive actions initially. Congress may eventually pass legislation to dramatically reform the asylum-seeking process, which is needed since the existing legislation does not refer to asylum seekers physically crossing the border.

Both political leaders and media pundits have suggested the need for more restrictive immigration policies to protect American workers’ jobs in light of the COVID-19 pandemic. Meanwhile, in France, frontline workers have had their citizenship applications fast tracked by the current government. And the pandemic has slowed processing times for immigration applications in the States.  Do you have any thoughts on the short- and long-term impacts of the pandemic on American immigration policies?

Actually, while it is true that some suggest more restrictions on immigration to protect US workers in light of the pandemic, others suggest fewer restrictions, especially in certain industries. In addition, during the pandemic, a special case has been migrant agricultural workers. In April 2020, the U.S. government deemed them to be essential workers and increased the processing of H-2A visas for such migrants.

We think that what the French government did is forward-thinking, recognizing the contributions of immigrant health care workers.

Immigrants in the US have much higher infection rates, which relates to their working in front-line jobs. The share of the civilian workforce who is foreign-born (FB) is 17%, but that share increases to 19% in industries central to the COVID-19 response. And then if you examine the share for specific industries that are central to the pandemic’s response, you see that:

Again, all these shares are higher than the share of FB in the workforce.

Let’s consider the FB presence in the eight largest occupations in the health care and social service industries. Although the FB represent 17% of all workers in these industries:

Based on these data, it makes no sense to restrict immigration in these occupations and industries during a pandemic. If these immigrants, whose work is central to the U.S. pandemic response, were given a path to citizenship, we would be better protected. While some are already permanent residents and on such a path, many still seek and/or need legal relief. We would welcome such a U.S. government response. If it happened, it would have huge ramifications for millions of immigrants and their families.