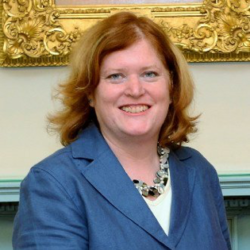 Anne C. Richard served as Assistant Secretary of State for Population, Refugees and Migration in the Obama Administration (2012-2017). Previously, she was Vice President of Government Relations and Advocacy for the International Rescue Committee. In addition to the State Department, she served at Peace Corps Headquarters and the US Office of Management and Budget earlier in her career. She has enjoyed fellowships from the Council on Foreign Relations and the Robert Bosch Stiftung. Ms. Richard is a graduate of Georgetown University’s School of Foreign Service and has a Master’s degree in Public Policy Studies from the University of Chicago. Since leaving office in January 2017, she has taught at Georgetown University and been a visiting fellow at the University of Pennsylvania's Perry World House.

In addition to teaching at Georgetown, ISIM Affiliate Anne C. Richard will be spending part of each week this fall as the Sol M. Linowitz Visiting Professor of International Affairs at Hamilton College in Clinton, New York. The Sol M. Linowitz Visiting Professor of International Affairs was established in 1986. It is named in honor of a 1935 Hamilton graduate who served as ambassador to the Organization of American States, chairman of the board of Xerox and co-negotiator of the Panama Canal treaties. He was President Jimmy Carter's representative in the Middle East negotiations from 1979 to 1981. The holder of the Linowitz chair teaches an upper-level seminar course while at Hamilton.